The tale of Tails to Treasure 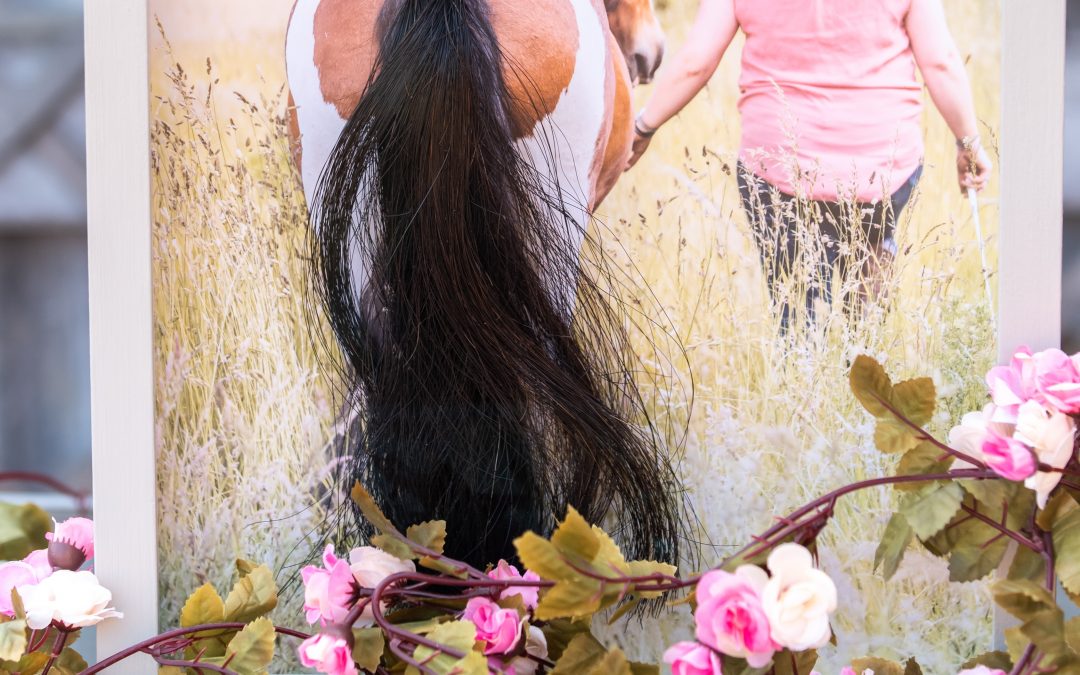 Last year I made the exciting launch of my own horse hair keepsake product Tails to Treasure.

I thought I’d share the story of how it came about – the tale of an uphill battle that I lost to save my heart horse Rio.

You may or may not have followed me for a while, so I apologise if some of this is repetitive! You can skip down to “An idea forms” if you know our story.

For those of you who are new here – welcome – I’ll fill in a few blanks. Towards the end of 2017, it started to become apparent that my beautiful Welshie cross was struggling. We had issues when a rider was on board that just wasn’t showing with in-hand work. Rio had been with me since November 2013, and I knew something wasn’t quite right.

We tried rest, gradual introduction back into light work, and I even enlisted the help of a coach who specialised in biomechanics, to see if we could help him in his way of going. We gave it a few months but I wasn’t happy with his progress… So after speaking to my farrier to see if there was anything obvious I decided it was time to call the vet.

Rio had never been a big fan of being stabled, ever since I’d had him. As it turns out, he just never liked stables where he couldn’t see what was going on outside, but I digress… My vet came out and we did lameness work-ups and took scans. The first time he was recommended to stay in, I dutifully mucked out his stable, and got as much hay stuffed in there as I could. He had a really high door due to his anxieties (and having jumped out at our previous yard).

You guessed it, he still managed to jump out.

In fact, I think it was 3 times he jumped the stable door, with his dodgy suspensories. This was inside the main barn, onto concrete. Even with his best friend stabled next to him and going through similar investigations at the time, he just wasn’t a happy horse in there. The vet agreed that fencing a small section at the front of his field was the best way forward for all of our sakes…

Over time we progressed to steroid injections in his hocks and sacroiliac alongside shockwave therapy. I was also using his Arc Equine regularly to keep him comfortable. I know it did, as I also invested in December 2018 in a Trackener kit. It was invaluable over the forthcoming months in seeing his condition deteriorate. You can read more about the Trackener here.

Despite all of this, every time we seemed to be taking a step forward and I could get back on board, we went back to square one. Although we concluded that it was both hind suspensories that were damaged beyond repair, and that it could have been conformational, I often wonder now if there were further underlying issues.

He was slightly upright in his hocks, but we had never done excessive work or jumping as I’m just not that rider. We hacked, did groundwork and he popped the odd fence with a friend riding. However, my insurance was reaching its limit, and the only way to know for sure would have meant extensive scans. Even then it may not have been something I could fix at the end of it all.

I kept a close eye on him, and decided to retire him going into 2019. Having him as a pet, a friend, a confidante, was enough for me. As long as he was comfortable I’d keep him going. The Trackener kit kept me conscious of his movements and as the year progressed, Rio was moving around less in the day and laying down for longer and longer overnight.

By this stage he had moved into a stable outdoors. It overlooked the fields, and he was a changed horse out there. Gone were the 6am turn-outs and the 7pm bring-ins. He came in and went out as and when I got to the yard and was so easy to muck out. It got to the point where he just wasn’t comfortable without his Arc and 2 danilon sachets a day. I could see in his eyes he was hurting, his brows pinched, his mouth was regularly twitched down and tense.

I upped him to 3 sachets of danilon and called the vet.

I called upon my good friend Evie after this call. We had the most wonderful farewell photoshoot, just days before I had to do the hardest thing, and let him go. Despite the circumstances, we spent the afternoon laughing and smiling, and Rio on his painkillers looked like his old self. We played at liberty, running around the field together and pretending nothing was wrong.

We had a lovely gathering at the yard the night before he went. My friends joined me in giving him all the treats he was never usually allowed, along with plenty of cuddles. He even got to try out the new hot horse shower on the yard, and stood perfectly. He was so soft and his white bits so white, and when I tucked him up in his stable and went to take some of his mane and tail hair for a keepsake, I couldn’t hold myself together any longer.

You see, I knew I was doing the right thing, and that’s what had held me together. I always promised him I wouldn’t leave it a day too late, and I knew I had to let him go.

After I said goodbye to him in the most peaceful way possible, thanks to my wonderful vet, I set about looking at what I wanted to do to keep him close. I’d already arranged to have a Tail End Jewellery keepsake matchy matchy bracelet, but I wanted to see if there was something a bit different.

Very soon after I received my gallery from Evie, and after multiple times of looking through, I bought the lot. These were all moments I will never get back; and I couldn’t bear not to be able to look back on them all. A few days later when looking through them again, an idea came to mind.

What if someone put tail hair into photographs? Was this a horse hair keepsake that already existed to purchase?

I searched the web to see if there was anything like this available. Aside from a lady who does line drawings and mounts the hair, there wasn’t. I knew that I had suitable photographs from Evie to try this out on; so I decided to give it a go.

After speaking to my print lab about how I might be best to go about this, I ordered my trial print, alongside an image for a friend who had just lost her horse. Now I had two to try it out on.

The horse hair and photos came together as planned, and after a quick email to my framer, I popped by to see if they could help. We agreed on a plan and I left our special tail photos in their capable hands. I am so proud of these, and I can’t wait to start seeing more of them go out to their loving owners.

You can click here to order your Tails to Treasure keepsake

I discussed the product with my coach, Tara, and we set about coming up with names. That first call about the frames ended with us in fits of giggles, and although we had a horse hair keepsake press release on the way to being finalised, we were no closer to a name. I’ll share a few we had here!

The following weekend I was away in the new forest and drove the girls mad, coming out with random and often terrible names. I probably also drove Tara a bit mad with regular messages too! On the last day, I woke up and Tails to Treasure popped into my head. It was the first and only name I came up with that everyone agreed on. So that’s how they came to be Tails to Treasure, and not Laura’s Fairytail Photos!

And now, the end is near

If you’ve read all of that, bloody well done!

Tails to Treasure is a real passion project for me, and if I can help you keep special memories of your horses alive in your home I’d love to have a chat. Tail clippings can be taken at any time for a keepsake, you don’t have to wait until it’s “that time”

And if you don’t have the perfect photograph?

Get in touch and you can get 25% off a photoshoot booking when a Treasure frame is purchased.