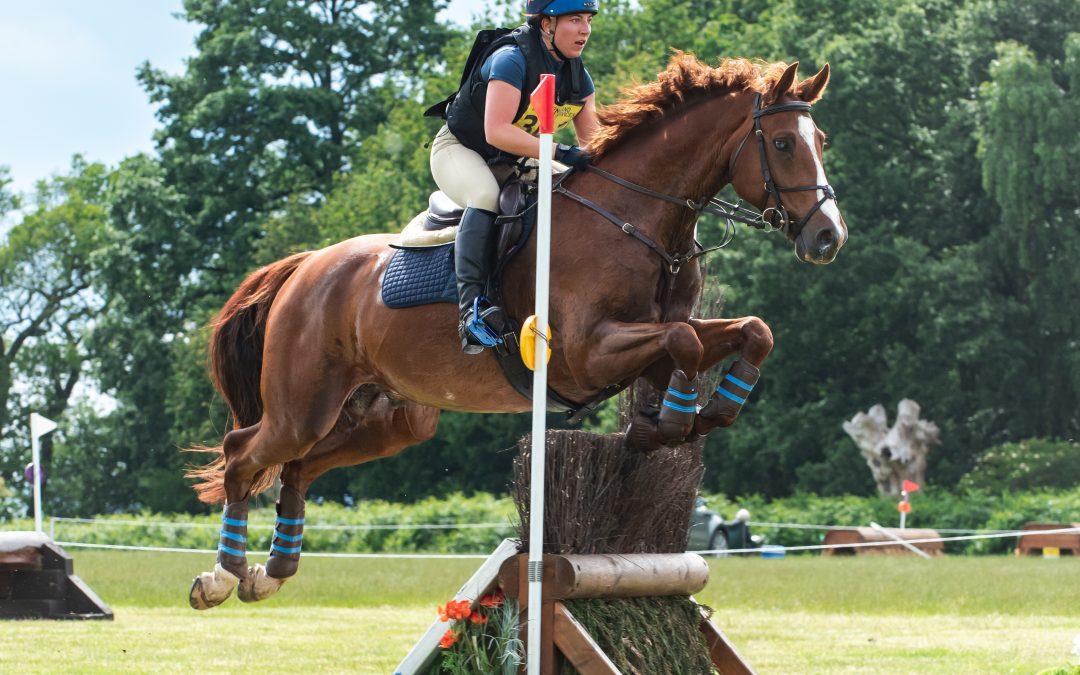 It’s the first year having my lovely brand ambassador Carrie on board, and we thought it was about time to share a bit of the story so far. For anyone who doesn’t already follow her, you can find Carrie’s updates over on Facebook and Instagram. Do pop over and give her a like and a follow!

So I’ll hand over to Carrie to fill you in! 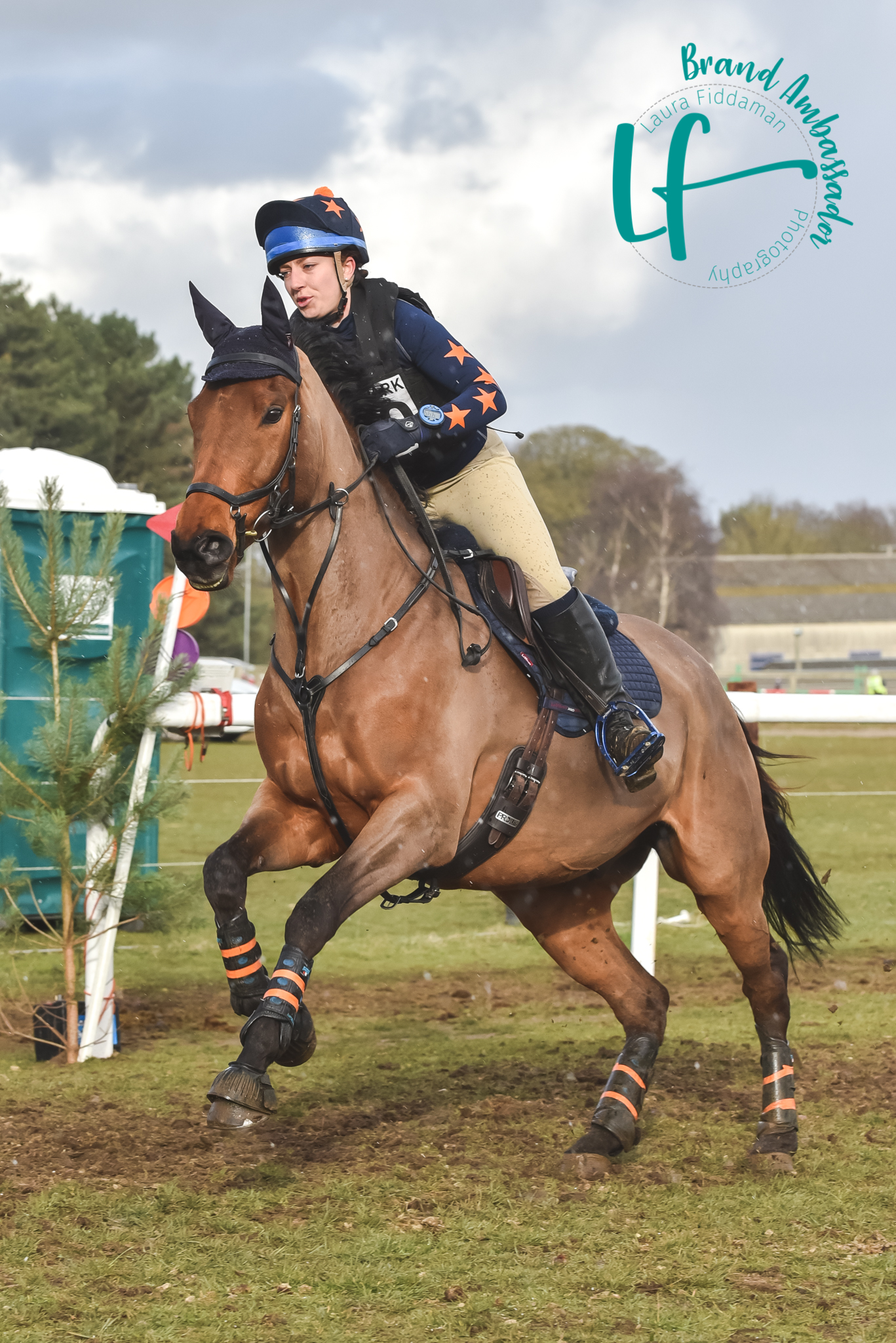 Our year so far

2019 started off with the plan of doing a 2* on either Ron or Pierre, so Winter training was in full swing when we decided to affiliate Ron to BD and try and qualify for the Youth Inter Regionals – and stepping up to BE Novice.

A bit of hectic to start for Ron with lots to focus on, but the event season started well with a 3rd at Poplar Park BE100. This was followed by a clear round his first Novice 2 weeks later at Great Witchingham.

Pierre also had a good start with a double clear at Poplar finishing 11th but had some uncharacteristic stops at Great Witchingham. Late April we would find that he had broken ribs. Cue some time off and a slightly erratic Pierre, we got the all-clear with the ribs to start work again. Sadly the good news was short-lived. We went on to find that he had some pretty severe kissing spines in several places. Some tough decisions were made but to cut a long story short, he has now been retired and is back home enjoying his retirement.

All I can say is that I had the best support group around this time and people pulling me through my multiple meltdowns and constant tears. So here’s a big thank you to everyone who was involved in that. I am so glad I had so much going on with Ron throughout – otherwise I think I may have gone slightly crazy!

Home International wasn’t originally part of the 2019 plan if I’m being completely honest! I regularly train with Tammy Ruffles, and we were chatting in a lesson one day as you do. She told me I needed to affiliate to BD and start getting some scores in – for the Inter Regionals and Home International.

This then became part of the 2019 plan but I was seeing it as a bit of a long term goal. Eventing took a bit of a back seat whilst we tried to get all our scores, which was tough. We had to fit in squad days for the Inter Regionals, shows for the Home International and our weekends were getting crammed. To qualify we had to have a certain amount of scores that we submitted to the selectors. I must admit I didn’t think our scores were good enough to get us in!

The email
I had been on holiday for a week – definitely needed after the chaos of the first half of the year. Just a couple of hours after getting home, I was shattered after travelling all day. My parents were talking in the living room and all of sudden I heard Mum say ‘Oh my god, she’s done it!‘ I knew this was the day we were due to find out whether we had made the team.

I really didn’t think we were going to make it and at 10.30pm I had definitely resigned to not being on the team. When I read it, I was in complete shock and was a bit lost for words! 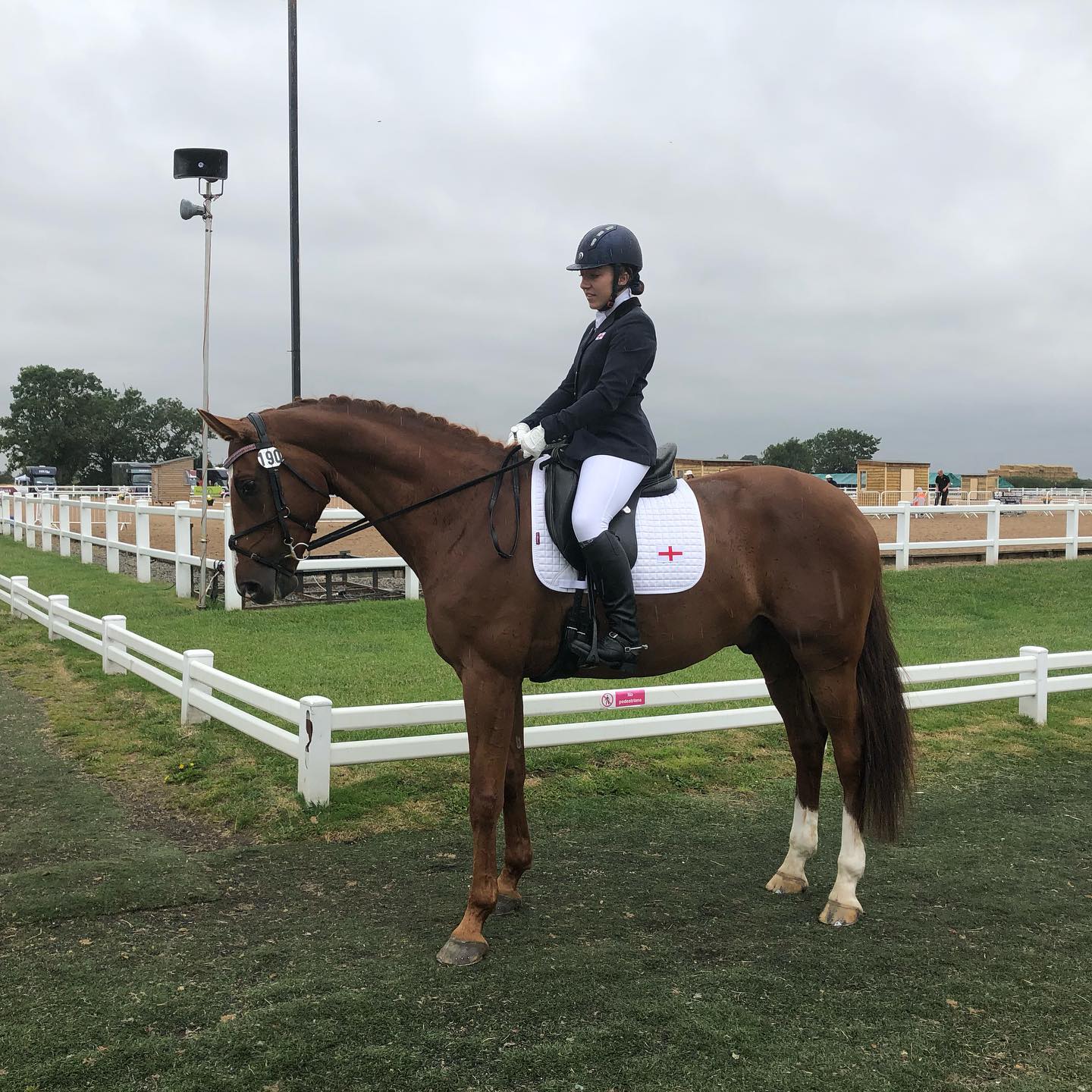 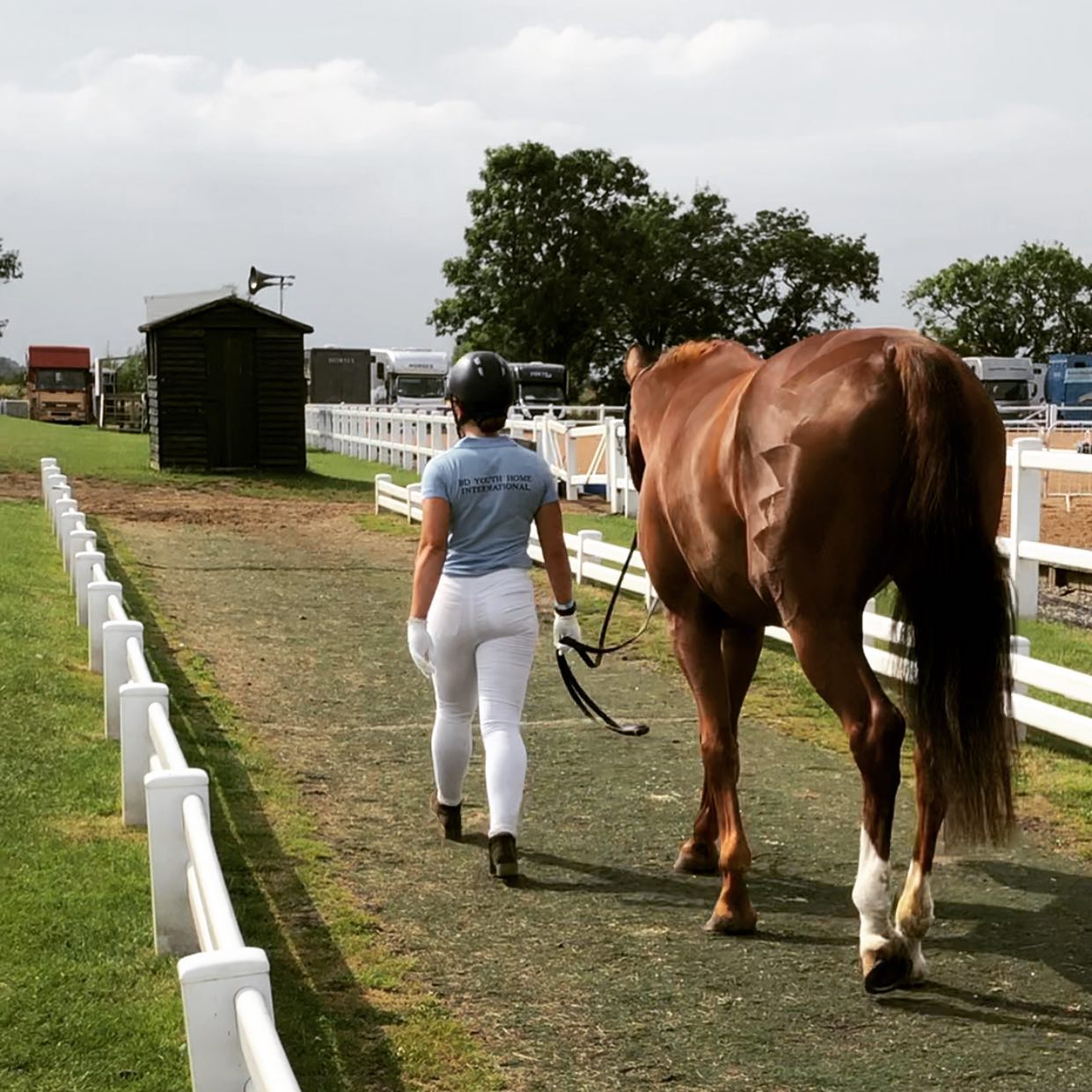 Things completely changed after that email came out. Ron had been at Tammy’s while I was on holiday. He felt fantastic! Three days after my holiday, it was off to the Inter Regionals. After doing really well at Keysoe (and finishing 2nd) we were under strict instructions from a lot of people of NO eventing before the HI.

I had to make do with jumping at home! Luckily we have a bank and ditches, so I did as many different things as possible to keep our eye in for the cross country. Ron over-reached 10 days before, which he has never done, but he’s very good at picking up little injuries just before a big competition. After that I decided not to jump at all until after the competition – just to be on the safe side!

We went to Codham Park BD a few days before we were due to leave. They had two of the tests on that I was doing at HI, so I couldn’t really turn down the opportunity to go and run through them. There were a couple of errors from both of us, but Ron pulled it out the bag to win both his sections. We were 2nd overall in both so I can’t really complain!

Onto a last-minute lesson with Tammy the day before we left to run through my 3rd test. I just couldn’t ride, and the pressure was on! After Tammy making me pull it together and sort my act out we ran through and perfected it.

37 degrees heat sums up the journey pretty well! We made it up to Arena UK without stopping, but I was in and out of the back of the lorry with water and sponges to keep Ron cool. Mum came with us, she comes everywhere as she has to drive the lorry! Under 25 and trying to get an HGV license without the insurance price tag? Not a good combination! Mum loves it though, even if I could take myself she wouldn’t allow me to!

I was slightly panicking about the trot up. Usually, when I have to trot him up at home I get tanked off across the yard by Ron. Often we end up back at the stable very quickly! 17.1hh warmblood and 5ft 2″ me never makes for an easy job. Luckily he was a saint when we did it. I could even have done with having a whip to keep him moving!

It was a relief when he passed, although I wasn’t worried about him failing… it is always a bit of pressure trotting up, especially if you’ve had a long journey, to be told you’re not allowed to do anything when you get there!

The tests – Day One

Into the test and I didn’t feel nervous but I wasn’t riding as much as I could have done, or as I normally do. I made a costly mistake in the 2nd canter. Obviously, I was annoyed, but we got a good score and we lay in 12th overnight. I was really pleased as I had aimed to try and be in the top 20!

We were lucky enough to just avoid the rain, it started just as I was walking out the arena which I was quite pleased about! It then rained for the rest of the day. Having travelled up in ridiculously hot weather, I completely forgot to bring any waterproofs!

Sunday rolled around after a late night on Saturday. We had a BBQ and quiz followed by a load of us in the lorry for the evening. Up nice and early again for the arena walk. Sunday was a bit more relaxed as my test wasn’t until 2 pm. It was quite nice to just have a chilled morning and watch the rest of the team. It was still raining; the stables and car park were flooded by this point, so no matter where you went, you were guaranteed to be filthy.

1 pm came around and I wanted to be on board by 1.20 pm to have a slightly longer warm-up, and really have Ron with me in the arena. He warmed up brilliantly even in the rain. I was slightly worried about this, as it can affect his blind eye. Luckily by the time we were going in it was just misty and the test felt great.

I was really pleased. Then chuffed to have got a better score than the Saturday, to put us into 13th overall. The competition was so tight, and with lots of smart horses, Ron looked decidedly average. We missed out on the top 10 by just 0.07% which I was slightly gutted about. BUT I can’t complain at such a big occasion and having aimed for top 20! 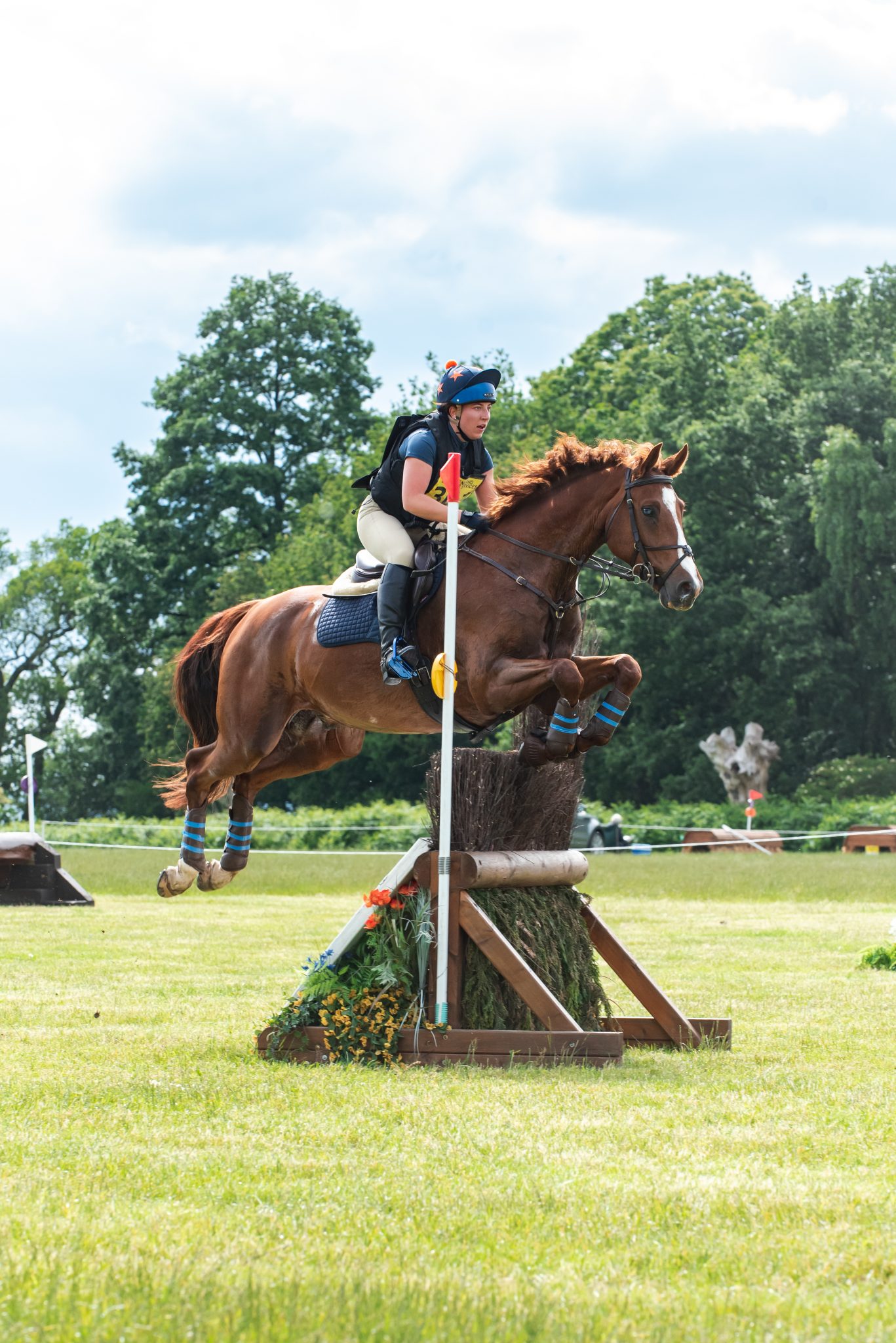 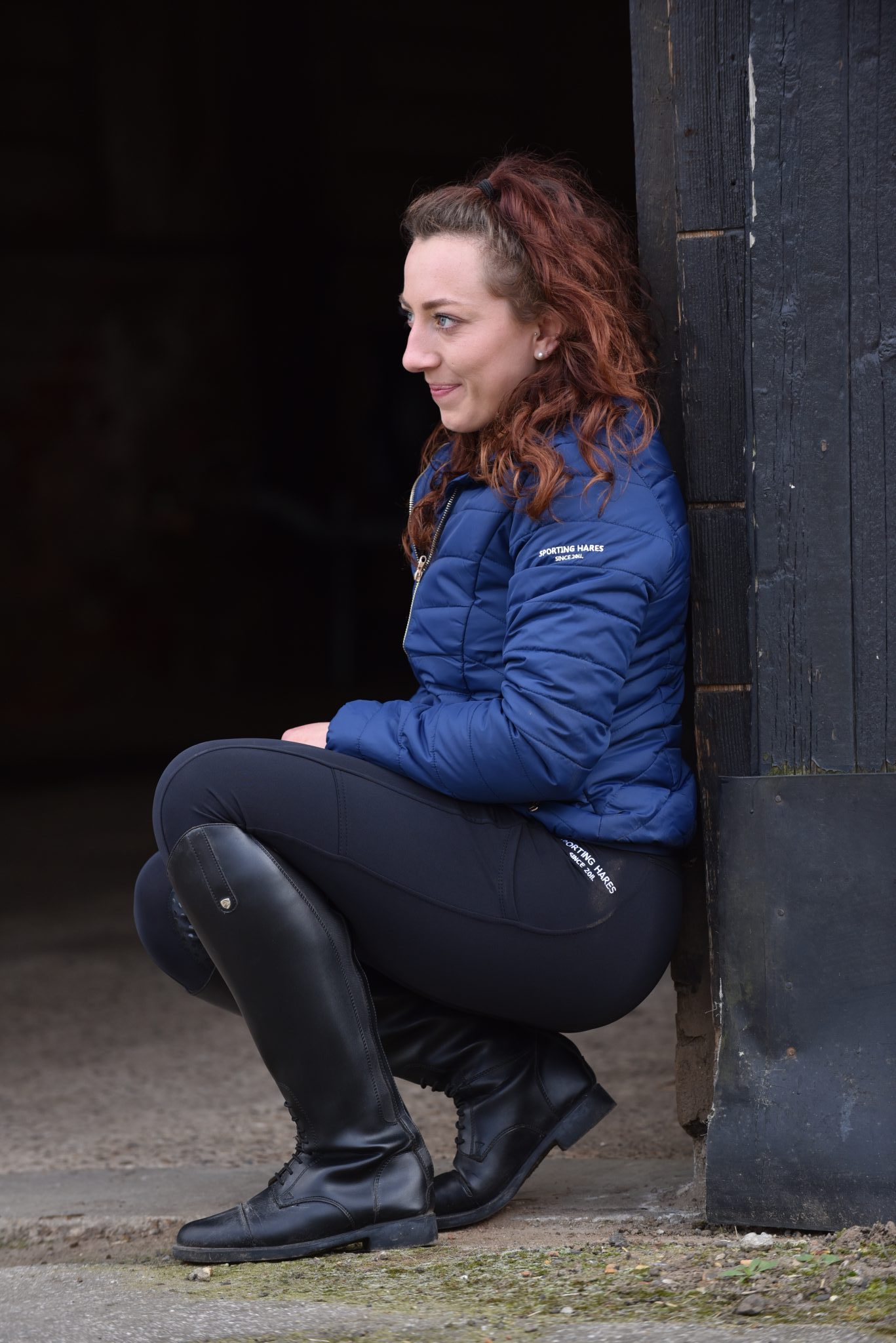 The experience definitely taught me I do get nervous sometimes! I don’t tend to put the pressure on myself at shows but I definitely did here, and it showed on the first day. I also affirmed that Ron really is something special. He makes everything feel so easy; no matter what I throw at him, he always has a way of pulling it out the bag.

Focussing on the rest of 2019
Time to get back eventing! I am desperate to do that 2* as I won’t be able to do it this season now. I need to get the rest of my MER’s to be able to do it, so that is the plan for the rest of the season. Then we can focus on that aim into the start of next year.

Once the event season is over Ron will be having a very well deserved holiday and chill out – ready to start again with the winter training.

Big thanks to brand ambassador Carrie for this write-up! Watch out for another blog in Q4!

Want to keep up to date?